Why outsource your call center operations to India?

Home / BPO / Why outsource your call center operations to India?

Why outsource your call center operations to India?

Call Centers is a place where large volume of request calls is received or transmitted. Call centers in India are numerous as with opening of India's economy to the world, India's service particularly boomed. Outsourcing to India was cheaper as compared to other countries. The low labor cost is what gives India the edge over other countries. India only spends 30%-40% of the total cost on man power, this includes employee training, incentives and other benefits.

Call center has an open workspace environment for call center agents, each agent has a computer for himself, a telephone headset connected to a telecom switch and to one or more supervisor stations. They are majorly divided into two categories -

These types of call centers do opposite of what Inbound Call Centers. Here, the call centers place a call to the customers, rather than the other way around, so the agents are for the most part of their day are making outgoing calls.

This makes outbound call centers sales focused, when the agents are making calls they have a list of potential or existing customers and try and sell them the product that is already in the market or is new.

The call center can either be inbound or outbound or a combination of both.'

Bangalore remains the most attractive location for outsourcing solution, along with Mumbai, Delhi NCR, Chennai, Hyderabad and Pune.

Call center services in India has been one of the major service sectors which has absorbed most of the college graduates since the very beginning, providing them jobs and increasing their quality of living, many college going students work part time, to support themselves. 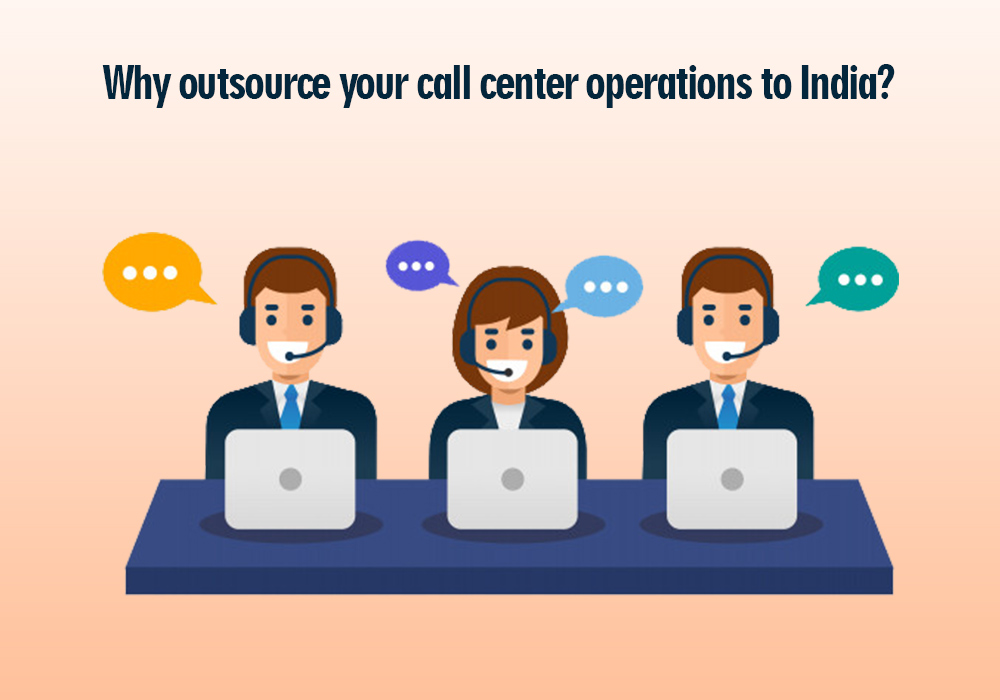 Allows you to lower the operating costs -

Any reduction in overheads let's a company shift more revenue to operational growth, simultaneously freeing up your time, especially if the company is tart-up or a small business enterprise. Small business outsourcing can provide continuity, control on expenses and risk management.  Setting up an in-house call center is a huge investment in infrastructure, equipment, staff, overheads etc. According to experts, outsourcing business process can reduce your expense by 50%.

If your business operations and customers are outside of your time zone, it is much more viable to outsource you call center operations. Doing so will allow your customers which are not in the similar time zone as you to have their queries resolved. With 12-hr time difference, India is an ideal call center location to provide European and North American businesses with after hour support. It will not be realistic for many businesses to provide in-house call center service.

Indian Universities are not known for their highly educated graduates, that come into the workforce every year. Out of the total graduates, Close to 2 million are English speaking students, and approximately 75,000 IT graduates every year. This gives a great advantage for call center operations which require high quality workforce who are fluent in English language. This presence of large workforce is sometimes the USP of many IT outsourcing companies, due to this they can provide scalable services as and when needed by their customers.

●       A Destination that is experienced in outsourcing

Even after many years of operation, India continues to be the preferred primary destination for offshoring multi-location sourcing strategy. India has provided high quality services for over 20 years. As a call center outsourcing destination, only India can very well boast about such experience in this sector. Not only the country provides quality call center services but other services like, engineering and product development and more complex analytical services in the form of research, are also provided.

●       The country is in the middle of 'Digital India' revolution

In India, favorable government policies have made sure that India is very well in the midst of a digital wave. The 'Digital India' initiative from the Government of India aims at connecting every nook and cranny of the country with quality IT infrastructure which will allow its citizen to be connected round the clock, with the rest of the world.  In fact, this will help many Tier II and Tier III locations, so that they can provide services at lower rates than Tier I locations.

The Government along with 'Digital India' has launched many schemes to support outsourcing to India, some of those schemes are -

The Indian BPO Promotion Scheme was launched in August 2015. It is Indian government’s ambitious project focused on BPO sector. It aims at providing direct jobs in BPO sector to approximately 144900 individuals. The cities which are deficit of digital technology are under main focus of the scheme. Allocation of Rs. 493 has been announced by the government for execution of this scheme. The expansion of IT industry in India is also a major driving force behind this initiative.

This scheme has been launched to provide monetary support to companies aiming to start BPO business, which includes establishment of call centers, in north eastern region of India. It is envisioned with digital India initiative of Indian government.

Eight states which are part of this scheme include:

Rs. 50 Crore has been allocated by the government for successful implementation of this scheme. It is aimed to create numerous employment opportunities for youth residing in the north eastern portion of India.

According to Tholons', ‘2015 top 100 outsourcing destinations report', 6 Indian cities are in top 10 outsourcing destinations. While Bangalore topped the list, Mumbai, Delhi, Chennai, Hyderabad and Pune were all behind Manila in the second spot in their respective order. All these major cities have a well-planned and thought out IT infrastructure and they do not lag behind, in terms of quality services in comparison with their western counterparts.

However, the rising cost of living is also pushing up the price of running call centers in Delhi, Mumbai and several other locations making it difficult for many outsourcing companies in India to sustain themselves.